A SNP refers to a location in a DNA sequence where there is a single letter difference between two DNA strands. In other words, we are all different mainly because of differences in our DNA sequence. In mammals, the reproduction process involves copulation between a male and a female individual. Since the two individuals are different, the paternal DNA sequence contains differences compared to the sequence inherited from the mother. We thus carry two DNA strands that are nearly identical except for certain differences that make us unique. There are multiple causes for these differences, because every imaginable modification that can occur in a letter sequence is present in every genome. Hence, letters can be added, removed, or substituted for another.

SNPs are an example of the latter type where a letter is replaced by another. While it is possible to modify multiple consecutive letters within a sequence, SNP modifications refer to cases where a single letter is modified.

Mammalian genomes have fairly similar sizes of approximately 3 billion letters. SNPs occur relatively frequently, and every genome can possibly harbor about 10 million such modifications given a gross estimate of one SNP for every 300 letters on average. This is only an estimate, but the large number of possible SNPs implies that they are scattered all across the genome. Since these differences are inherited from the parents, the characterization of an individual's SNPs gives a description of that individual's genome which can then be compared to that of other individuals. This allows, for instance, to identify families within herds, establish kinship, and determine the level of genetic variability among and between groups.

This information is important because typically, a population is healthy when several families contribute to the progeny, and more extensive genetic diversity allows a population to better adapt to any type of changes. Conversely, a very homogeneous population is generally more vulnerable to stress. 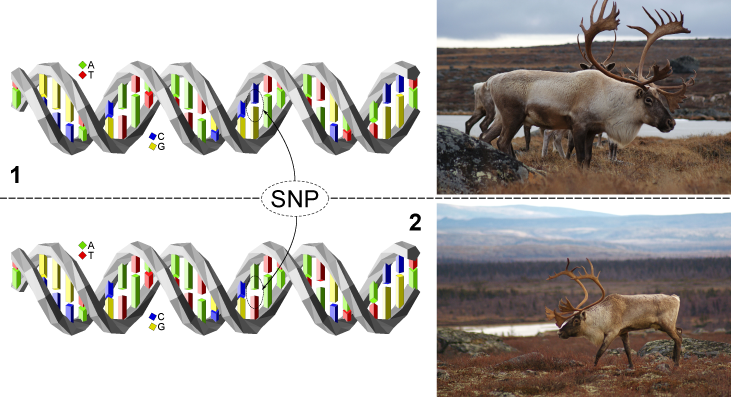 The genotyping SNP Chip can be used from DNA extracted from various sources such as:

BLAST is used to search a specific sequence on a reference genome. Basically, this algorithm searches for identical or partially identical sequences between the DNA sequence query and the nucleotide sequences that make up the caribou genome. There are numerous applications to this tool, including:

Genome browser is a tool that can be used to navigate a reference genome in order to visualize certain regions of interest. It allows a search to be performed using the genomic coordinates or the name of a gene. Similar to how Google Maps works, it allows a region to be viewed in its entirety or to zoom in on a specific segment to visualize known elements of the genome. It also allows information to be annotated on the reference genome using genomic coordinates.